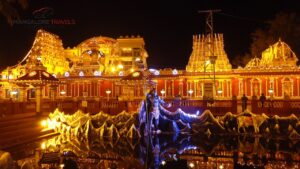 In Udupi, You will be taken to Shreekrishna Temple where you will have a visit to Shree Krishna mutt and Darshan of Lord Krishna.

Udupi Sri Krishna Matha is a famous Hindu temple dedicated to the god Krishna and Dvaita Matha is located in the city of Udupi in Karnataka, India. The matha area resembles a living ashram, a holy place for daily devotion and living.

After  Shreekrishna Temple, we will move toward Kumbashi. Kobashi is around 35km from Udupi and it will take approximately 45minutes to reach Kumbashi.

In Kumbashi, you will be taken to Anaegudda Vinayaka temple and have Darshanam of Lord Ganapathi and Lord Aiyyapa.

The Anegudde Vinayaka Temple situated on the hill attracts a large number of pilgrims. Important new activities in the area are started after the worship of this deity. The Temple of Mahalingeshwara is surrounded by a lake and puja is offered to a shallow pit in which “water from the Bhagirathi (Ganga)” is said to collect. The right side of the lake is called Surya-Pushkarini and the left side of the Chandra-Pushkarini. There are also shrines of Suryanarayana, Channakeshava, and Lakshminarayana on the banks of the tank and a branch of the Sode Mutt.

Having completed Darshanam of Lord Aiyyapa we will head toward Idagunji which is approximately 90kms from Kumbashi and it will take around 2hrs to reach there. In Idagunji you will visit Idagunji Ganapati Temple and have Lord Vinayaka Darshanam.

According to the legend, Lord Ganapati stayed in this place which was known as Kunjaranya. It is said to be a place of penance selected by ancient Rishis. The importance of Idagunji is mentioned in the Skanda Purana. This place is located on the left bank of River Saraswati. This temple is one of the major pilgrimage centres in Dakshina Kannada and attracts more than 1 million devotees per year.

Lord Vinayaka can be seen in standing posture at this temple, which is a rare sight. Vinayaka Chathurthi is the major festival celebrated here.

4.Gokarna and stay at Gokarna

After enjoying the day at Udupi, Kumbashi and Idagunji will travel to Gokarna. From Idagunji to Gokarna it is around 70km and is travelling time is approx 1hr 30minutes by Taxi/cab.

You will have a stay in Gokarna.

On day 2, Gokarna Pooja and Darshanam

In Morning Temple visit breakfast, the afternoon pooja, and lunch at the temple or nearby.

After lunch will head toward Murudeshwar and it is around 79 km from Gokarna and the travelling time is approx 2hour. There you will visit Murudeshwar Temple.

Murudeashwar is one of the famous tourist spots with lord Shiva temple in Uttara Kannada. Murudeswara is famous for the world’s 2nt tollest lord shiva statue and The gopuram is now the 2nd tallest in India hight is 237 feet.

Kollur Mookambika Temple is located at Kollur, Udupi District in the state of Karnataka, India. It is a Hindu temple dedicated to the mother Goddess known as Mookambika Devi. It is situated in the foothills of Kudajadri hills, on the southern bank of Souparnika River.

After all, this will finally head toward Mangalore City. From Kollur temple to Mangalore city distance is around 140km and a 3hr 30minutes journey by cab.

The temple is dedicated to the Hindu god Shakti in the form of Mangaladevi. The city of Mangalore is named after the presiding deity, Mangaladevi. It’s located at Bolalra Mangalore city.

Manjunatheswara temple is a very famous temple in Mangalore which is located in Kadri hills Mangalore city.