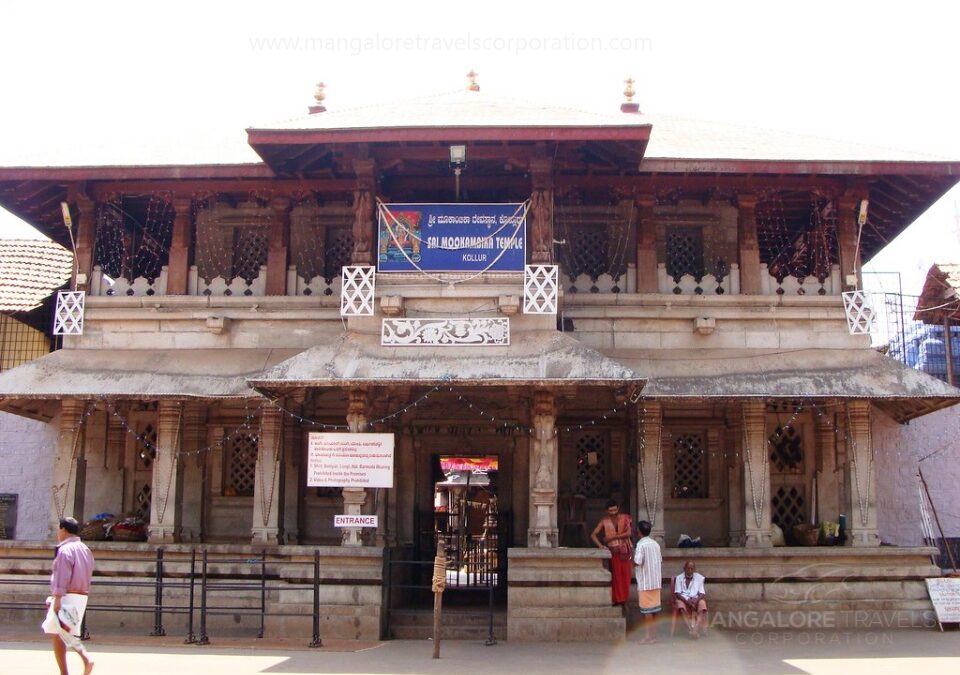 The temple is of significant antiquity and is believed to have been built during the 9th century by Kundavarman, the most famous king of the Alupa dynasty during the 9th century, under the patronage of Matsyendranath. As per another legend, the temple is believed to have been built by Parashurama, one of the ten avatars of the Hindu god Vishnu and later expanded by Kundavarman.

Udupi Shree Krishna Mutt: Udupi Shri Krishna Temple is a well-known historic Hindu temple dedicated to Lord Krishna and Dvaita Matha in the city of Udupi in Karnataka, India. The Matha area resembles a living Aashram, a holy place for daily devotion and living. The unique feature of the Udupi Krishna Mandir is that the Lord is not seen directly, but through a silver-plated window with nine holes called the Navagraha Kitiki.

Udupi Sri Krishna temple and Matha were founded by the saint JagadguruSri Madhwacharya during the 13th century. He also founded the Dvaita school of Vedanta. It is believed that Madhwacharya found the idol of Sri Krishna in a large ball of gopichandana, a kind of sandalwood. As told by Sri Madhwacharya, in his Tantrasara Sangraha, the Vigraha is placed Pashchimabhimukha, which means facing west. Also, All the other Vigrahas in other Ashta Muthas face west as well.

This is another interesting part of the Udupi Krishna temple story. It is believed that through a small window, Lord Krishna gave darshan to his ardent devotee, saint Kanakadasa. According to legend, Kanakadasa belonged to a low caste and was not allowed entry to the temple. But with courage, Kanakadasa went behind the temple and offered his prayers to the Lord through a small hole in the back wall. Pleased with the dedication, the statue of Lord Krishna turned around to give him darshan. This hole came to be known as Kanakana Kindi.

Aanegudda Vinayaka Temple: Aanegudda village is located at a distance of 9 km south of Kundapura, in Udupi District. Aanegudda Vinayaka Temple is dedicated to Lord Ganesha.Aanegudda is also popularly called Kumbashi. The name Kumbashi is said to be derived from the demon Kumbhasura. According to mythology, when drought hit this area, Sage Agasthya performed penance to appease the Varuna, the Rain God. During the penance, the demon Kumbhasura started troubling the sages. Bheemasena gets a weapon from Lord Ganesha to kill Kumbhasura and assassinate him at this place.

Aanegudda is rewarded one of the seven ‘Mukti Sthalas’ of Karnataka. The main sanctum contains the majestic figure of Vinayaka with silver Armour, in a standing posture with four hands in the Sanctorum. Ganesha Chaturthi and Sankastha Chaturthi are celebrated in the temple with great enthusiasm and a car festival is also held in the month of December.

Mookambika is an Adi Shakti as the Linga has integrated on its left side “MahaKali”, “Mahalaxmi” and “Maha Saraswathi”. In the form of Udhbhavalinga, Mookambika has also integrated Brahma, Vishnu and Shiva on the right side. A gold Chain is dividing this Jyotir-Linga into the left and right portions. The left side of the Linga represents Shakti and the right represents Shiva. Along with this, a four-handed panchaloha idol of Goddess Mookambika is also installed.

There are many beliefs regarding the origin of the temple. It is believed that the shrine of Mookambika Devi was installed by Adi Shankara. Since Devi had appeared in his divine sight during his meditation, Adi Shankara had set up the statue of Devi on “Sri Chakra Yantra”. Shri Shankaracharya’s Peetha is on the western side of the Sanctum Sanctorum of the Temple.

The temple has sub-shrines for Ganapathi, Subrahmanya, Shiva, Vishnu, Virabhadra, Hanuman and Snake gods. Every day morning at 5.00 am “Nirmalya Pooja” takes place and during that time the Devotees have an opportunity to see the Swayambhoo Lingam. Every day Trikala Pooja is performed in the Temple. Rathotsava in the month of Phalguna and during the days of Navaratri are the main festivals in this temple.

Day-2
Rama Mandira: Dharmasthala’s Ram Mandir is located on the shores of the Netravali river, at a distance of 3.5 km from the Shri Manjunatha Temple. Simple yet elegant in its construction, this temple has marble idols of Lord Ram, Lord Lakshman, and Goddess Sita. The temple complex overlooks the mighty Western Ghats with the Netravali River in the backdrop.

Built-in 2003, Ram Mandir was established by Nithyananda Swami who was a well-known spiritual leader and yoga guru.  The temple houses 36 idols of its presiding deities on two floors. Ram Mandir witnesses a grand celebration every year on the occasion of Rama Navami. Rama Bhajana Saptaha is celebrated for seven days to celebrate this major Hindi festival. Many devotees visit the temple during this time and chant the Rama Taraka Mantra around the Nanda Deepa.

Dharmasthala Manjunatha Temple: Dharmasthala Temple is an 800-year-old religious institution in the temple town of Dharmasthala in Dakshina Kannada, Karnataka, India. The primary deity of the temple, Majunatheshwara, has taken the shivalinga form. Besides the chief deity, other idols like Dharma Daevas and Shakti are also worshipped in the temple. It is also the abode of Lord Dharma’s four Guardian Spirits, Kanyakumari, Kalarkayi, Kalarahu, and Kumaraswamy. This Shiva temple is beseeched by Vaishnava priests and administered by Jain descendants.

Many festivals and annual events are held on the temple premises, attracting pilgrims from far and wide. Laksha Deepotsava and the Pattanajae Jatre are some of the major festivals celebrated in the temple. Besides this, significant festivals like Diwali, Navaratri, and Ganesha Chaturthi are organized with great enthusiasm and spirit.

You cannot conclude your spiritual journey to the temple without climbing the Annappa Betta which is also known as Badinede Betta. The residence of the four Dharma and a shrine is sited on the top. If you are a history buff, you can also visit the Manjusha Museum. Located near the Manjunatha Temple, the museum has an exquisite collection of swords, old cameras, and armours. You can also find Vintage Cars from Sri Veerendra Heggade’s collection.

Most people regularly travel by hiring a Mangalore to Kollur Mookambika and other temples Taxi for their devotional and tour needs. It is very important to have a comfortable journey so that you are fresh when you reach the destination to make the maximum out of your trip. The travelling distance from Mangalore to Kollur Mookambika Temple is 142 Km.

MTC cabs is an easy-to-use web portal that facilitates the booking of Mangalore to temple trips car rental service in just a few clicks. Mangalore Travels Corporations is renowned among its customers for providing world-class services at extremely affordable rates for their Cabs from Mangalore to Nearby Temples. Make the best use of the services offered by MTC cabs at the best rates & experience a relaxing and trouble-free journey by hiring a car rental from Mangalore to Temple Tour at MTC cabs. With over a decade of experience in travel services, MTC cabs are the best cab service provider in the industry, if you are planning to book Mangalore temple trips cab hire services.

Mangalore to Temple trip by taxi

The trip from Mangalore Temple Tour can easily be covered by car in terms of distance and time. You may halt during the trip at your convenience anytime, anywhere and enjoy your short break. Distance between Mangalore to Kollur Mookambika and all nearby is always a pleasant journey with MTC cabs.

Mangalore Travels Corporations has a large fleet of hatchbacks, sedans, and MUVs in its fleet and customers can always select the most suitable car as per their requirements and budget. Rest assured you will have a convenient and enjoyable journey with MTC cabs Mangalore Temple Tour taxi service. Our courteous Chauffeurs make all efforts to ensure that our customers feel comfortable during the journey. The following table mentions the various taxi options available for booking Cabs from Mangalore Temple trips.

We assure to get a reasonable Mangalore to Temple Tour cab fare at Mangalore Travels Corporation. We make sure that the associated terms and condition declared on our website is exactly what the customer is expected to pay. Below shows the breakup of the taxi fare from Mangalore to Nearby temples:
Fare Category What does this include? How is this calculated?
Base Fare This includes the fuel and maintenance charges for a designated distance and duration of a particular trip. The base fare is calculated by multiplying the per-kilometre rate for your cab with the minimum assigned kilometres for your trip.
Driver Allowance Covers the Driver’s food & lodging expenses. The driver allowance is calculated by multiplying the daily driver allowance with the number of days you engage your cab.
GST Goods and Service Tax of 5% that is levied by the Government of India Includes CGST (2.5%) & SGST (2.5%).

Apart from the above fare categories, there are no hidden charges in your Mangalore to Kollur Mookambika taxi fare. In case you have any queries regarding the rates MTC cabs charges, do not hesitate to reach out to us at +919880797829 / +919741647829. We are available 24X7 to assist you.
Do not forget to check our Travel Information pages to get more details like the distance from Mangaluru Temple Trips, restaurant recommendations, and other useful information.

If you plan to take a flight, land at Mangalore airport and are wondering how to reach Nearby temples look no further than booking our Mangalore airport to Kollur Mookambika cabs. One out of three of our customers use our last mile airport connectivity and convenience to reach the most remote parts of the country without any hassles.

MTC cabs’ continuous focus on complying with customer demands and travel needs has positioned us as a true customer-centric player in the road travel/tourism sector. In order to make customers outstation travel truly memorable, we offer several Mangalore to Kollur Mookambika, Murudeshwar, Dharmastala, Kukke Subrahmanya, and Sringeri cab packages. Our website is continuously updated with the new seasonal packages that are launched. You can also call our customer care number to explore the various tour packages from Mangalore to Kollur Mookambika. After choosing any of these packages from Mangalore to Kollur Mookambika, you can be assured that you are getting the most efficient rates, the most courteous and experienced drivers, as well as MTC cabs, and guaranteed service levels. Customers are provided with options for a one-way, single day as well as multi-day car packages from Mangalore Temple Tour.